Did Love Save Us When The “Worst” Happened?

Most people have an idea of what the worst circumstance is that could happen to them, and sub-consciously or consciously navigate their lives trying to avoid it. For some it is the fear of illness especially if their parents faced complicated health problems. For others it could be financial: the fear of being poor (no one fears being wealthy).  For some it could be losing someone. Either when a relationship ends or when a person’s life ends. For parents of teens, it is a myriad of concerns that we fear. “The worst thing” can take on any form to different people in different circumstances. For myself, there were several “worsts” but none more than when it concerned Savannah.

Like many new mothers, when I became a mother for the first time, I had a certain level of obsession about how I wanted Savannah to be cared for. But then, when she was diagnosed as a person with cerebral palsy, my attitude switched between “whatever will be will be” to “follow every piece of advice” exactly, precisely according to the doctor or therapist or anyone who I believed had any experience in caring for a child who had significant challenges.  Some days I felt overwhelmed by how much I had to remember about her respiratory issues, her physical challenges and her cognitive challenges.

Yet, like most new mothers, I was ever hopeful that my love was enough to save her from any and all obstacles. We were going to prove the world wrong and she was going to move out of my house by the time she was eighteen and attend university. I wrote a post some months ago titled “When love is not enough” about how we face that truth time and time again.

So was the extent of my hope. My heart raced towards this idea only because on an emotional level, I was running from the possibility of Savannah never being able to walk and worse still, I was ever fearful of one day finding that she was not going to wake up. I fully believed with all my heart that this diagnosis of cerebral palsy was the “worst” that could happen. I ignorantly thought that surely once a baby is diagnosed with such a condition, they must be exempt from all other terrible issues?

But no. In fact that very diagnosis and later on the added complications of Savannah being a person who is autistic, taught me that she was never exempt from anything. Her life was like a magnet for all strange and complex health problems both physically and cognitively. If I thought I was overwhelmed by Savannah being diagnosed as a person with cerebral palsy, I had no idea that was only the very first inch of the iceberg of all her challenges.

During the first ten years of Savannah’s life, I went through a cacophony of emotions as I grew from being a teenage parent, to a divorcee, to being a single parent, to my parents marriage finally falling apart, to eventually building my own second marriage and becoming a mother to Talisa.  All that in ten years! So it is no wonder that I struggled with depression for most of my life. I could not share this with my family because they believed it was a sign of weakness. When I married Michael this was further complicated when as I Christian I was told that I could not be depressed.

So continued my confusion about why I was here and even more bizarrely why, of all the women in the world, was I given a daughter who needed so much? If being depressed and having thoughts about suicide was causing me to be my own obstruction in receiving God’s love, what hope was there for me now in my role as a parent? As a parent who was struggling with post traumatic stress disorder from childhood trauma and other issues; I felt very lonely and isolated. While I could verbalise some issues to other women in my family and in my church; I was almost always left feeling inadequate. Michael tried very hard to understand this inexplicable, deep sadness but he could not undo what he had not done to me.

All he had to offer me was his love believing just as I believed about my love for Savannah: it would save us from further pain.

The truth of that belief became real about six years ago. I was having a very hard time coping with Savannah when she finished school. A few of our friends’ children with special needs were going to live in facilities and Savannah liked this idea. She did not fully understand what that would mean for her though.  For a few days Michael and I were having these heart wrenching discussions about Savannah trying a respite centre for four days a month.  It was difficult to admit that I was not coping with Savannah and that she and I both needed a break from each other. It was a tough conversation and one that both Michael and I struggled to find the right words for. Michael was listing off all his fears:

“We have worked so hard for her and it feels like we are giving up.”

“How can we trust them?”

“They don’t know her. What if something terrible happens to her?”

As I listened to him put into words what was also my fears, I surprised myself by my response. I said something like this: “What could be worse than what we have already faced? Our worst fears are already true. She lost her ability to walk by herself.  Her doctors believe that she has a limited life span. But we are still here. Those things are true but we are still here. The worst has happened. It is happening and we are still okay. What more can we not face?”

That was a defining moment for me. As I said those words. It was as if I also reminded myself of all the “worsts” I have lived through. It had all happened already. The power of that realisation put into sharp focus that in the midst of all the chaos of life, I raised a family who are intact and thriving.  It hit me so hard to realise that we had already lived through all the “worsts”.

Just before Talisa was born was probably one of the hardest times in my life and it lasted a few years. I was mourning the loss of my family as my parents marriage disintegrated, while coming to terms with Savannah’s additional diagnosis of autism and trying to be a good mother to Talisa who was a very demanding baby. The weight of everything at that time was incredible. I felt that life would never be happy.

But somehow here I was years later having this discussion with Michael about Savannah having an experience that I knew required a great deal of courage on my part. Like physical exercise that builds muscle,  somehow I had grown mentally and emotionally strong in the areas of my life story that should have destroyed me. I gained the ability to remain steady and in control. I learnt to see life from other people’s perspectives which is a great ability when raising a family where a child is autistic and is also a person with cerebral palsy and other conditions.

So did love save us?

What else could have given me the mental agility to be flexible and the wisdom to be emotionally vulnerable to become everything my life needed me to be. Being loved unconditionally by my husband was God’s gift to me. Learning to love myself for exactly who I was, and trusting God’s plan for my life, was my gift back to the loves of my life.

Love saved us. The “worst” has only broken us wide open to share it with everyone.

In the end what else matters?

Author: Desirae Pillay
Filed Under: A Million Beautiful Pieces, My Inspiration
Tags: Adults with Special Needs, Depression, Emotional Health, Faith Hope Love, Family First, Inspirational, Love never fails, Loves Saves, mental health, when the worst happens, Woman Struggles
To Fall: To Protect From or To Teach How To?
I Am Every Woman 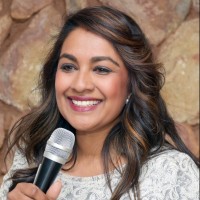